The speaker for the evening, Mr Nazirul Amin Bin Talha was introduced by Rtn Ziad.

“S.O.S”. is a three letter abbreviation of the phrase “Save Our Souls” that we use during emergency situation. In the ancient time, ancient people used a variety of ways to send out S.O.S. signals, such as huge drums, a fire beacon, smoke and scouts / runner who ran miles across to deliver messages, as in the history of the marathon. Thanks to science and it’s advancement in research and development, man were able to create the Morse code; a system that used a set of dial codes that transformed to words. A few decades later, the army founded a revolutionary equipment – the “walkie talkie,” which was capable of relaying S.O.S. much quicker, than the previous methods.

At present, in this technology era, scientist funded by corporate giants have been able to produce high tech gadgets such as the pagers, commonly used by medical practitioners in hospitals. At the same time, there were computers. With computers powered by the internet, we able to receive S.O.S. Alerts at lightning speed even from any continent. Within a few years, the world saw the emergence of mobile application software (apps) that can be easily downloaded into our mobile phones.

Community Alerts, is one of those apps. It is free to download and use, totally without any charges. Community Alerts is an S.O.S mobile apps that is developed by Global Forway Sdn Bhd and Wiseyes Solutions Sdn Bhd. Currently it is the only S.O.S. apps that communicates directly with PDRM all over Malaysia. With Community Alerts, one only needs to press a button on their mobile phone to send out the distress signal either by the owner of the smart phone or from a third party perspective, anywhere and anytime. Community Alert is best used during; gang fights, snatch thefts, emergency health, fire disasters, burglaries and accidents. Community Alert is also equipped with a navigation system, that directly points you to the nearest S.O.S Stations whether you are in Malaysia or even Singapore. In the case of Singapore, the S.O.S. will be first received by the Johor state police who will then relay the information to the Singapore police force.

S.O.S Stations refer to the “authority facilities” such as the police station, government hospitals, fire stations, house; embassies; and RELA (Malaysia only). 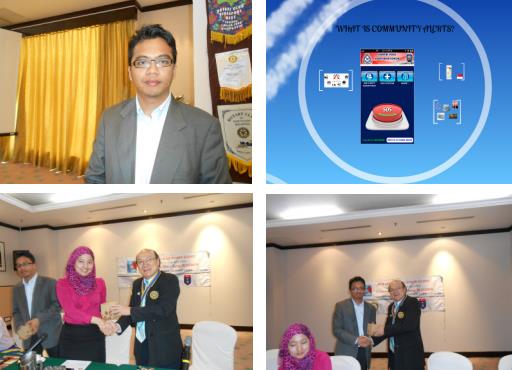 What makes Community Alerts different from the other S.O.S apps in the regions is that each S.O.S. is being sent out directly to the nearest state police command control centre without even dialing a single number! Once you press the Community Alert S.O.S. Button, your loved ones (provided that you key in their contact details inside the apps) will also be notified of your situation and location via SMS.

Moreover, once the S.O.S Button is pressed, Community Alert will continue to send out distress signals to the state police every 20 seconds. Once the distress signal is received by the police, they will immediately make contact with you via phone call while sending the patrol car to your location.

With Community Alert you do not need to tell where you are anymore, as the S.O.S. sent has already provided your GPS location to the police; so they know where you are at that time. In brief, Community Alert has significantly reduced the amount of time for the authority to save your life, your loved ones, or belongings. With this, Mr Nazirul Amin took questions from the members of the club. The speaker and his colleague were thanked by IPP Francis Gopal and they were presented with tokens of appreciation by Pres Tan Chee Seng.